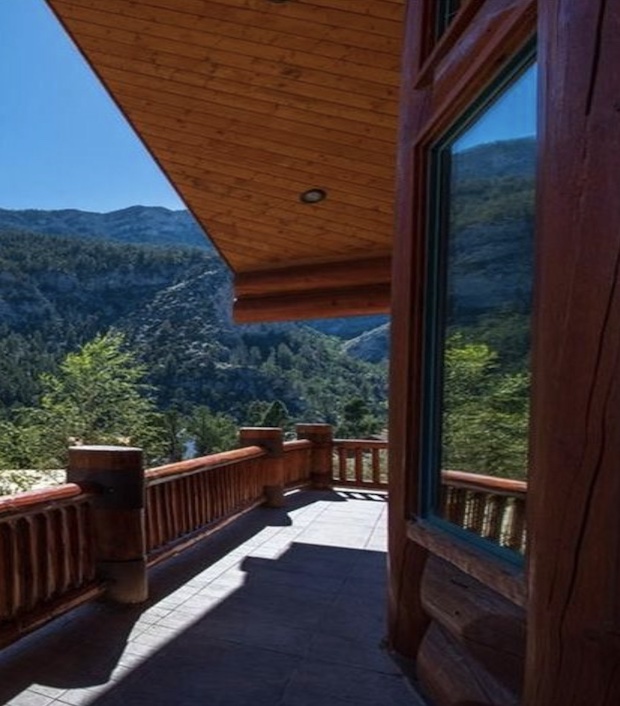 Echo Heights is a hidden treasure in Mt. Charleston near Las Vegas, a prestigious sleepy-town where you can thoroughly enjoy all that life has to offer.

Experience breathtaking panoramic National Forest views from the privacy of Echo Heights. This fully custom quality log home showcases unique craftsmanship throughout. With wrap-around decks, heated floors, and a heated driveway, you can enjoy the four seasons of Mt. Charleston, all while being just 45 minutes from the entertainment capital of the world of Las Vegas. Echo Heights is the ultimate mountain retreat.

Just 45-minutes to the northwest of Las Vegas you will find yourself surrounded by the beauty of the Humboldt-Toiyabe National Forest. It is here that you will be transported to the untamed beauty within the Spring Mountains National Recreation Area and discover the private luxury of Echo Heights in Mt. Charleston. This Full-Scribe custom log home is the perfect balance of treasured modern charm and custom master craftsmanship.

Located in the exclusive Echo View neighborhood in Mt. Charleston, this spectacular property will capture your heart from the moment you arrive at the private heated brick-paved driveway complemented by the tranquil sounds of the trickling stream and waterfall feature. With panoramic mountain views surrounding this highly sought-after neighborhood, Echo Heights features wrap-around heated decks accentuated by the stunning setting of the National Forest and hiking trails.

The mountain hospitality spirit lives in each and every corner of this Full-Scribe custom log home. Natural light seeps into each room and allows for an inviting atmosphere to entertain or simply enjoy time with family. The great room complete with a custom stone fireplace was made to relax and enjoy the magic of the Spring Mountain views from the unobstructed 2-story panoramic double-pane windows.

As a popular gathering place for family and friends, the chef’s kitchen will not disappoint with its cozy breakfast nook, top-of-the-line appliances, and spacious island, complete with prep-sink. Each corner is filled with heated slate flooring, ample storage, and bay windows showcasing beautiful views of the National Forest. Completing this ideal area is the spacious walk-out heated deck to enjoy the sights and sounds of Mother Nature.

Whether cooking for your family, preparing an intimate dinner for two, or hosting a large party of friends, everyone will want to gather around and take part in every moment spent in this culinary hub. As you decide on edible delights, enjoy the crisp, clean fresh air drifting in through the skylights. Everything is right at your fingertips to create, share conversation and soak in the Mt. Charleston beauty all around you.

The master suite of Echo Heights is your own private hideaway revealed through double arched doors. The high ceiling, spacious closet, and sitting area with fireplace will set the perfect mood for relaxation and comfort. The master bath offers every luxury you could ask for with double sink vanity, soaking jacuzzi tub, multi-jet shower, and plenty of storage.

With four additional bedrooms, a loft game room, and home gym for workouts, you’ll have plenty of room for friends and family in your very own custom mountain log home.

Located to the northwest of Las Vegas, the town of Mount Charleston lies in a valley of the Spring Mountains. It is home to Charleston Peak, at 11,916 feet it is the highest point in Clark County. At an approximate elevation of 7,500 feet, the temperatures average 20ºF lower than that of Las Vegas, this makes Mount Charleston a popular destination among affluent Las Vegas residents for a long weekend to get away from all the action of the strip.

Visitors and residents alike come to Mount Charleston for horseback riding, hiking, and biking the many trails in the Spring Mountains. Skiing is also a large attraction for the overnight visitor with Lee Canyon Ski and Snow Resort close by for ski enthusiasts, it also provides an escape from the heat below.

It goes without saying that neighboring Las Vegas, which is a short 45-minute drive from Mt. Charleston, is an internationally renowned major resort city. Considered “The Entertainment Capital of the World” it is known primarily for its casinos, shopping, fine dining, entertainment, and nightlife. Las Vegas is also among the top three destinations in the United States for business conventions, a global leader in the hospitality industry, and ranked as one of the world’s most visited tourist destinations.

With the city becoming an ever-popular backdrop for films, television series, and music videos, it is not surprising that you will find The Las Vegas Academy of International Studies, Performing and Visual Arts, a Grammy award-winning magnet school located in downtown Las Vegas. Additionally, the Smith Center for the Performing Arts is situated in Symphony Park and hosts a variety of Broadway shows and artistic performances.

Disclaimer: All information is deemed reliable but is not guaranteed and should be independently verified. The property is listed for sale by Zar Zanganeh (Lic:1000811) of The Agency Las Vegas (Lic:1000811). Data not verified/guaranteed by MLS. Users are responsible for verifying all information for total accuracy. Auctioneer is Maverick Commins. Supreme Auctions, LLC is the provider of auction marketing services. Neither Supreme Auctions, LLC, its agents, auctioneer, affiliates, Broker of Record or Seller warrant or guarantee the accuracy of any information and shall have no liability for errors or omissions or typographical errors, inaccuracies or misprints under any circumstances for this property listing or advertising, promotional materials or publicity statements and shall be held totally harmless. Neither The Agency Las Vegas nor any of their affiliated companies are providing any auction services in connection with this event. Auction services are being provided by Supreme Auctions. Brokers are fully protected and encouraged to participate.