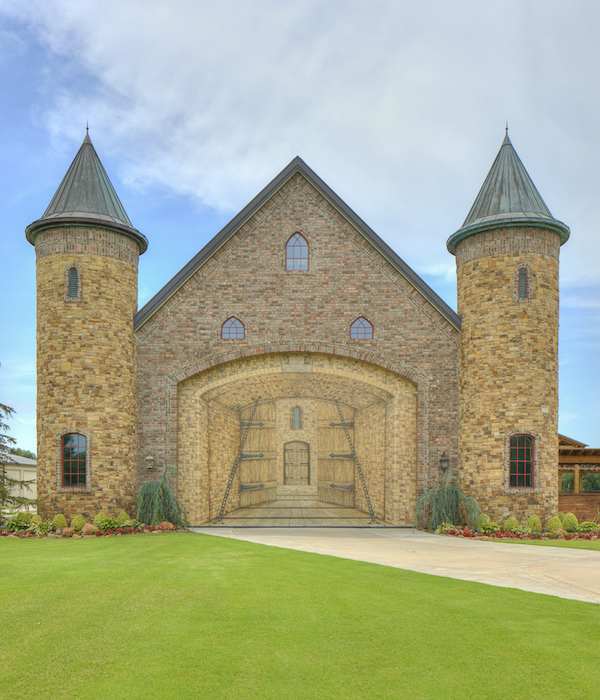 Make your own personal fairytale come true with the enchanting charm of Milam Castle. Built in the Tudor-style of Old England, this one-of-a-kind luxury manor is ideally perched on five acres in the gorgeous plains of southwest Oklahoma City. Combining an opulent environment, top-of-the-line high-tech features and warm indulgences, this estate has just the right mixture for a truly magical destination to live, work and play.

As you approach this personal kingdom through the private gate and meander up the paved driveway, your senses will be delighted by the expansive outdoor space, lush tree line and romanticism of the custom-built turrets highlighted with decorative brick and hand-painted drawbridge mural. To top off the expansive grounds, the cedar gazebo provides additional appeal to the endless possibilities of this dream-come-true home.

Entertaining at Milam Castle will be the talk of the town whether it’s a simple dinner with family or exuberant affair with hundreds of guests. With numerous options within the house to spend some time getting to know neighbors and business acquaintances, the entertainment possibilities are truly endless.

Get the party started in the fully air conditioned and heated expansive garage that can accommodate over 20 choice collectors cars and vehicles. With its custom built-in Irish pub bar and performance stage, this space can double as an indoor-outdoor banquet hall. You can host private concerts, special occasions, themed weddings, holiday gatherings and office parties with ease.

The outdoor space makes this home the ideal property for luxurious entertainment. Whether dancing the night away under stars, saying precious vows in the gazebo or sipping a glass of wine poolside, you couldn’t ask for a more perfect setting to enjoy the company of those you care for or making a few new friends.

Get ready to devour divine recipes prepared with love in the kitchen facilities of Milam Castle. The simple task of planning a meal is a pure joyous occasion in this culinary perfection destination.

The chef in the family will love trying out new dishes in the second-floor kitchen. The breakfast bar provides the quintessential space for sipping your morning coffee and preparing for the day’s events. Everything from the custom cabinetry to the high-end appliances to the fireplace create an environment of warmth and innovation. To top it off, the kitchen has an open-floor concept allowing for a sense of flow throughout the living room, dining and pantry areas.

The queen and king of any castle will tell you that the master suite must provide a personal utopia in which relaxation and privacy are at a premium. Milam Castle will deliver the optimal setting for a peaceful escape from your busy life with a walk-in closet, double-trey ceilings, elegant touches throughout this main bedroom, and direct access to the en-suite bathroom with Jacuzzi soaking tub, rainfall shower, and his/hers sinks.

The additional guest bedrooms allow for visitors and family to enjoy the home with their own space. The first bedroom provides the ultimate in protection, as it doubles as a storm shelter complete with a bank vault door. The second bedroom, also located on the first floor, allows guests or extended family to easily access the guest living room and their very own kitchen.

Oklahoma City (OKC) welcomes you to the capital of Oklahoma. With its rugged Western past, working stockyards and title as “Horse Show Capital of the World,” its rich in cowboy culture, as well as being known for family fun, romantic retreats and outdoor adventures. OKC was named as one of the 50 Best Places to Travel in 2020 by Travel + Leisure due to its culture, cuisine, attractions, amenities and home to one of the fastest growing entertainment districts in the U.S. — serving up unlimited action in the city’s downtown Bricktown Entertainment District.

Nestled within the Great Plains region, Oklahoma City boasts being home to a number of Fortune 500 companies, as well as being the eighth-largest city within the United States and one of the largest livestock markets in the world. OKC has plenty of hustle without the hassle.

Whether you are looking for museums, theaters, sporting venues, or celebrated parks, OKC has you covered. For a deep dose of culture, you can enjoy a vast number of museums like the Oklahoma City Museum of Art, or perhaps you’d prefer to listen to some music by the Oklahoma City Philharmonic. If sports are your thing, OKC is home to a number of teams, such as the Oklahoma City Thunder (NBA), Oklahoma City Dodgers and the Crusaders of Oklahoma Rugby Football Club (USA Rugby). For fun in the great outdoors, check out Myriad Botanical Gardens, Oklahoma City Zoo or Six Flags Hurricane Harbor Oklahoma City.

Oil originally made Oklahoma a rich state; however, now it has natural gas, oil refining, meat packing, food processing and machine manufacturing as its most important industries. In addition, Oklahoma’s rich plains produce bumper yields of wheat, as well as large crops of sorghum, hay, cotton, and peanuts.

Oklahoma is also known for its tourist attractions, including the National Cowboy Hall of Fame, the Will Rogers Memorial, the Cherokee Cultural Center, Fort Gibson Stockade, the Lake Texoma recreation area and the Blue Ribbon Downs.

If you select Oklahoma as your destination of choice to enjoy all that life has to offer, your own happy ending will be written when Milam Castle becomes your home.

Disclaimer: All information is deemed reliable but is not guaranteed and should be independently verified. The property is listed for sale by Angela Jo Parker (Lic:172920) of Keller Williams Realty Mulinix (Lic:132477). Data not verified/guaranteed by MLS. Users are responsible for verifying all information for total accuracy. Auctioneer is Maverick Commins (Lic:16744). Supreme Auctions, LLC is the provider of auction marketing services. Neither Supreme Auctions, LLC, its agents, auctioneer, affiliates, Broker of Record or Seller warrant or guarantee the accuracy of any information and shall have no liability for errors or omissions or typographical errors, inaccuracies or misprints under any circumstances for this property listing or advertising, promotional materials or publicity statements and shall be held totally harmless. Neither Keller Williams Realty Mulinix, nor any of their affiliated companies is providing any auction services in connection with this event. Auction services are being provided by Supreme Auctions. Brokers are fully protected and encouraged to participate.