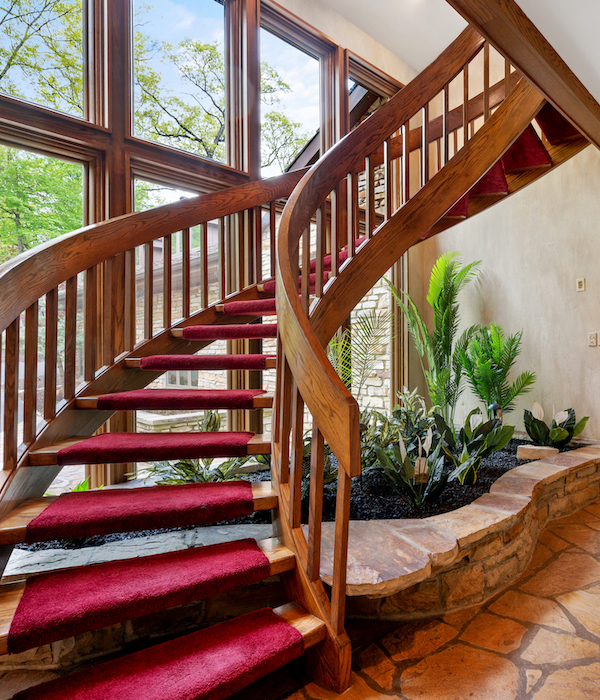 Imagine elevating your lifestyle beyond your hopes and dreams in the prestigious community of Sewickley Heights, a residential suburb just 15 minutes from Pittsburgh. It is here that you will discover Hillside Hollow, an extraordinary, architecturally significant, Mid-Century modern estate that will captivate your soul from the minute you set eyes upon it. This property will leave you spellbound with its magnificent 24 acres of enchanting trees and meticulously maintained grounds.

From the moment you enter the private driveway, you will immediately be awe-struck by the picturesque natural setting, unique tree carvings, mature landscaping, spectacular views, and the unforgettable luxury home tucked into the naturally wooded property in Allegheny County. Offering privacy with endless possibilities of walking through the forested acreage, makes Hillside Hollow an ideal environment for equestrian activities, bird watching and the enjoyment of being surrounded by ‘mother nature’ and the great outdoors.

Hosting friends and family just became effortless! Whether you are gathering for the holidays, a special occasion or a casual reunion, Hillside Hollow offers everything you could want and more with its ample personal space and abundant communal rooms.

As you enter through the beautiful front double doors, you will feel like you have brought the outside in with you as the custom stone wall fountain rhythmically cascades in the background and instills a sense of peace, relaxation, and bliss. The floor-to-ceiling windows allow the natural light to fill the home with warmth and highlights the brilliance of this luxurious home. The open-floor concept adds to the endless entertainment potential, where friends and family can enjoy camaraderie while soaking in the beauty that surrounds this home.

When it’s time to put your feet up and let your mind drift away, there is no better place to be than the living space of this enchanting home. Imagine sipping a glass of wine, while enjoying your favorite music via the homes’ surround sound system, as the charming views immerse you in dazzling beauty. It reminds you of something straight out of a fairytale where wishes do come true and happily ever after is a daily occurrence.

You could not ask for more than the heart-of-the-house at Hillside Hollow. This newly renovated customization is a spectacular symbol of what a kitchen really should offer for luxury living. Nothing has been left to chance… the quartz countertops, professional-grade appliances, lighted custom cabinetry, and wine storage add the perfect attention to detail expected in a home of this stature.

An intimate dinner party with your closest friends and relatives just took on a whole new meaning. This kitchen transforms meal preparation into a magical joint effort filled with joy as the conversation and laughter fills the air from the adjacent family room.

Enjoying meals become seamless as the formal dining room offers the ideal setting to take in the stunning views of the property and the comfort of the high-end features of this wonderful room.

Prepare to be immersed in the lap of luxury in the master suite of Hillside Hollow. As your eyes soak in the impressive views, your mind will breathe a sigh of pure relaxation taking in all this bedroom has to offer. To best take advantage of the space and landscape, a raised dais was created for the bed placement in this sumptuous room. Combined with the vaulted ceilings, personal enclosed deck, stone fireplace and the natural light streaming in from two skylights and numerous windows, you have found your own unique utopia to escape and renew.

The additional five bedrooms, located on the second floor, are ideal for extended family or visiting friends. Each room is en suite, ensuring that everyone has their own privacy and space.

Known as one of the most affluent residential suburb neighborhoods of Pittsburgh, Sewickley hosts to some of Pennsylvania’s most famous residents. Several players from the Pittsburgh Penguins have called this area home, as well as actors, writers, and politicians.

Built strong by steel production back in the day, Pittsburgh continues today to be celebrated for its manufacturing of aluminum, glass, and petroleum, as well as being a leader in computing, electronics, and the automotive industry. In addition, this fascinating area caught the eye of Hollywood and has one of the largest and most advanced movie studios in the eastern U.S. with areas of Sewickley being featured in such productions as the series, Steel Magnolias, and the Jack Reacher movie, among others.

Culture has been a priority for Pittsburgh, where museums, galleries and visual art organizations can be generously found throughout the city, which include the Carnegie Museum of Art, the Mattress Factory, and Andy Warhol Museum.

If you are a huge sports fan, Hillside Hollow is the home for you! Pittsburgh hosts three major league franchises in baseball, football, and hockey; not to mention the numerous minor league teams in soccer, baseball, hockey and three NCAA universities.

When you are ready to realize your life’s potential, Hillside Hollow will charm your mind, body, and soul, all while basking in the privacy of Sewickley and the convenience of having Pittsburgh just minutes away.

Disclaimer: All information is deemed reliable but is not guaranteed and should be independently verified. The property is listed for sale by Kim Marie Angiulli (Lic:RS314552) of Coldwell Banker Real Estate Services (Lic:RB066636). Data not verified/guaranteed by MLS. Users are responsible for verifying all information for total accuracy. Auctioneer is Joseph Mast (Lic:AU005282). Supreme Auctions, LLC is the provider of auction marketing services. Neither Supreme Auctions, LLC, its agents, auctioneer, affiliates, Broker of Record or Seller warrant or guarantee the accuracy of any information and shall have no liability for errors or omissions or typographical errors, inaccuracies or misprints under any circumstances for this property listing or advertising, promotional materials or publicity statements and shall be held totally harmless. Neither Coldwell Banker Real Estate Services, nor any of their affiliated companies is providing any auction services in connection with this event. Auction services are being provided by Supreme Auctions. Brokers are fully protected and encouraged to participate.